Who knows what they must think, the people who live in the flats we are staring at from a tiny lane at the back of St Bart’s Hospital. We are just the latest in a long line of headphone-wearing observers, standing a stone’s throw away from St Paul’s Cathedral and the more imposing Barbican Estate. It’s enough to make you buy net curtains.

We stare because we are told to, absorbing a couple of sentences of narrative. It’s what creator Duncan Speakman refers to as a “small fiction” — just a few lines about the characters our digital narrator tells us inhabit the apartment block. Each of these little stories, which dedicated Conan Doyle fans might spot are from the Sherlock Holmes canon, help build to create A Hollow Body, “a cinematic experience for two people in the City of London”. 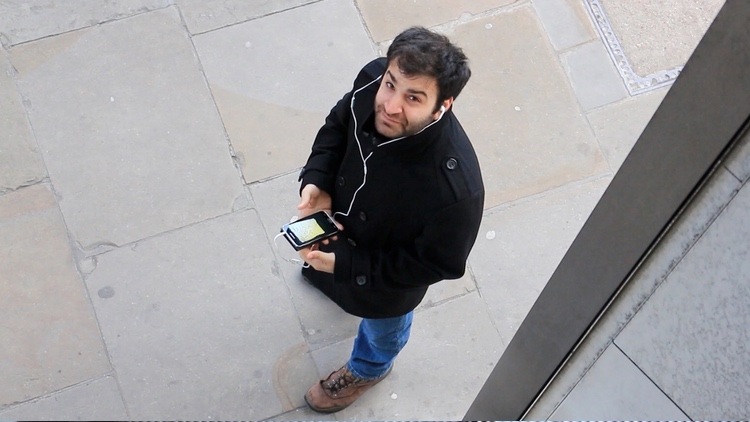 Downloaded as an iPhone or Android app, A Hollow Body is an absorbing audio piece commissioned by the Museum of London from collaborative art collective Circumstance. “The Museum approached us,” Speakman tells me when I ask how the opportunity came about, “based on the kind of work we make and said they wanted to do something in our field; a cinematic, walking, theatrical experience related to or inspired by their Sherlock exhibition.” 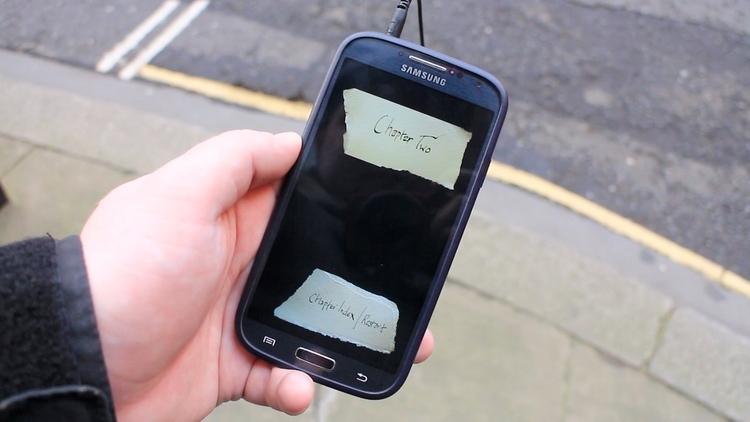 Running through to 12 April 2015, that broader exhibition carries the strapline ‘the man who never lived and will never die’. Speakman draws on the recent hit BBC TV series as an example of how Conan Doyle’s mysteries and the man himself have been reimagined for a new generation, and yet again become the foil for exploring unseen aspects of the capital.

“You look at the period they were originally written in, when the world was becoming ever-more complex, and he can see through all of this dense data and make sense of it…”

“What Sherlock Holmes does himself is make sense of a complicated world,” says Speakman of the famous ‘consulting detective’, “you look at the period they were originally written in, when the world was becoming ever-more complex, and he can see through all of this dense data and make sense of it. For us there was a sense of reflection on that; how can we make sense of such an ever-increasingly complex world.”

Circumstance’s approach to Holmes does not mention the man himself explicitly in the piece and there is not a deerstalker or Benedict Cumberbatch fan in sight. “One thing we decided quite early on was that we needed to separate the piece from the Museum website,” Speakman adds, “partially because we think of the experience starting the moment you go to that website, read about it and get the download.” 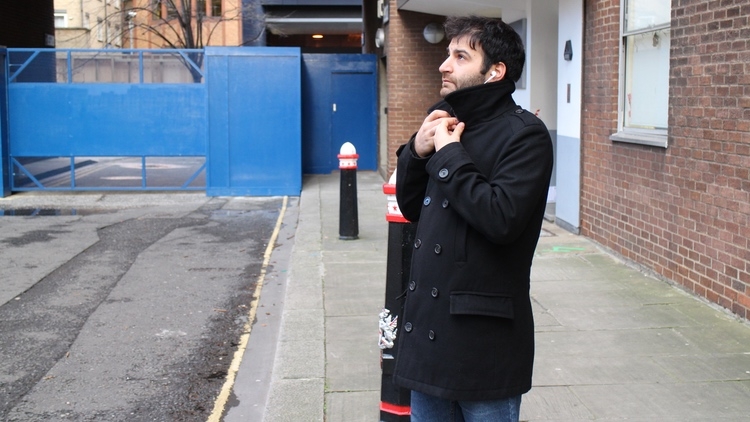 Designed to be experienced in pairs, the work could not be more different from your traditional stick-on-and-go museum audio tour. Winding our way from Temple Bar, alongside the financial giant’s City monoliths and down lanes tiny enough to be overlooked by those who pass them every day, my partner and I find ourselves as the cast for the afternoon.

“There is not a deerstalker or Benedict Cumberbatch fan in sight.”

Starting as a couple we are quickly sent in different directions. Sometimes we catch sight of each other down passageways, at other times we form scenes for the other to observe simply through our presence. I can’t help but act up a little, knowing that I am being watched standing on a Barbican high walk by my partner from a bus stop below.

Some of the images that A Hollow Body creates are quite mesmerising, playing with reflections in the windows of giant glass office blocks, the urgency dictated adeptly by Sarah Anderson’s haunting and beautiful underscore. “There are two clear things we do in terms of music and pace,” Speakman advises when I tell him I felt the speed I was walking had been manipulated. “One is that you can nudge people on and pressure them by adding to the tension of the music. You can also make a very clear demarcation in space. Shifting the tone of a piece will change how you’re feeling about a space, which tends to naturally slow people down.”

There’s an instant playfulness that comes from undertaking a journey like this as a pair. “You build what we call the narrative of experience,” Speakman says, “you’re getting this story that is built up through the different images that you create.” Circumstance have explored creating relationships between pairs of audience members in their previous work and Speakman says it was clear from an early stage that A Hollow Body would be devised for two people.

“Mobile technology and digital devices are really good at connecting you to remote spaces, places and people, but they also have the ability and tendency to distance you from your immediate physical and social surroundings.”

Having a double act explore the streets also brings the piece closer to the Sherlock inspiration, Speakman says: “There are dualities that go through all of the Holmes stories, whether that’s Holmes and Watson or Holmes and Moriarty, the pairing. So there were a lot of interesting things about two people and what the roles of two people would be.

“Mobile technology and digital devices are really good at connecting you to remote spaces, places and people, but they also have the ability and tendency to distance you from your immediate physical and social surroundings. A lot of what we do is to try and use those same devices and re-think them so they force you to connect with where you are and who you’re with.”

And while my perception of the City’s goings on may not have been increased to Sherlock Holmes’s levels, there are certainly aspects of the Square Mile that A Hollow Body illuminates along its route. “The majority of our work happens in what we call ‘uncontrolled space’,” says Speakman, “we don’t say ‘public space’ any more because there’s a tension between spaces that are demarcated public and private space, and it plays on that.” 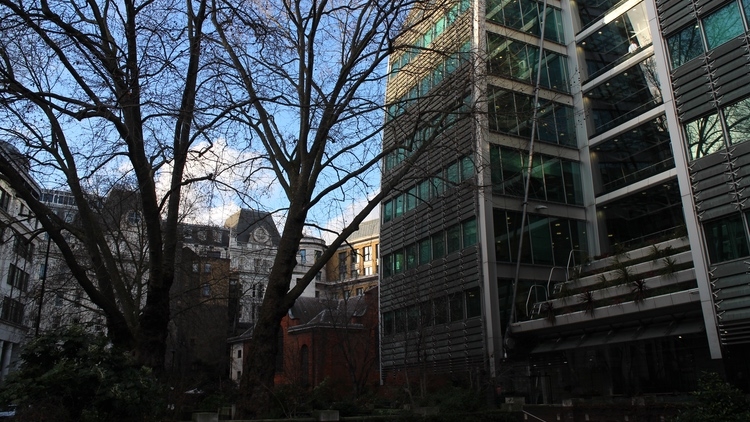 To give just one example, the next time you are walking past a large public building, look down to see if there is a row of small metal markers sunk into the pavement, about the size of a two pence piece. They are used to demarcate where the public realm ends and the private land begins.

“I still think mobile audio is one of the strongest forms of augmented reality we have. You’re engaging totally with the world but you’re having a different digital experience layered onto it.”

“It was kind of amazing when we found those,” Speakman tells me when I ask about the discovery, “it was somewhere else that we initially found them and then we realised that they were everywhere. We couldn’t resist. Early on in the piece there is a bit where you and your partner stand on opposite sides of them and there’s a kind of ‘oh, right now one of you is in private space and one of you is in public space’.”

Finding out how these two worlds interact caused Circumstance to have “interesting discussions with lots of security guards and office workers” over the course of the piece’s development, Speakman tells me. He perhaps agrees with me about the need for net curtains: “With some of our work we definitely put the audience in difficult positions, with this one we decided not to. In some ways for me the most uncomfortable moment is in the small alley when you’re looking at the apartment building, because it’s so close to you.”

Asking Speakman how he defines the work he creates, he tells me that although its digital distribution causes it to be categorised as a piece of ‘digital art’, as far as the actual content goes it’s “an audio work and a performance”.

As an artist creating work that is delivered via digital means, does Speakman see each new device and feature as a fresh canvas for his work?

“A Hollow Body, I would argue, is an augmented reality work,” he tells me. “It’s just audio, but I still think mobile audio is one of the strongest forms of augmented reality we have. You’re engaging totally with the world but you’re having a different digital experience layered onto it. I’d love to see that kind of Google Glass-type augmented reality allow you to do interesting things visually, although I’m waiting for it to be at a point where it’s really something interesting and useful, and something you can do narratively or information wise.”

So as an artist creating work that is delivered via digital means, does Speakman see each new device and feature as a fresh canvas for his work? “We are resistant to novelty,” he says, “only because in a lot of works made with digital technology the way that they’re promoted, marketed or talked about is because of a novel use of a technology in that situation. What happens then is you don’t get the chance to refine the artworks made within that technology. It would be like we were looking at Lumière Brothers films and no one made any other films after that because people were like ‘we’ve done that technology, now we need to work on new ones’.”

A Hollow Body is a self-guided audio walking tour designed to be experienced in pairs, starting from Temple Bar. Download the app to begin your journey at http://ahollowbody.com. A Hollow Body and the Museum of London’s Sherlock Holmes exhibition run to 12 April 2015. More information at http://www.museumoflondon.org.uk.

Thanks to my travelling companion for the day and subject of all of my photos, Eyal Israel.

Originally published by The Space on 17 February 2015. 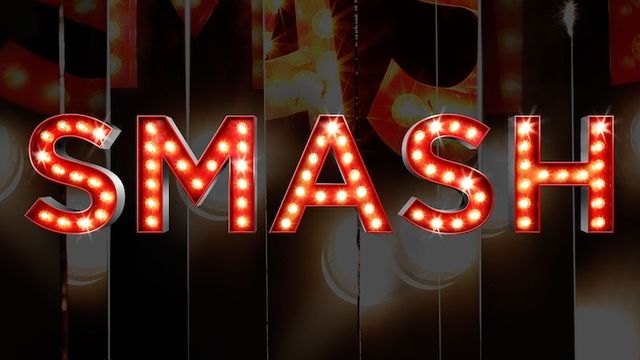 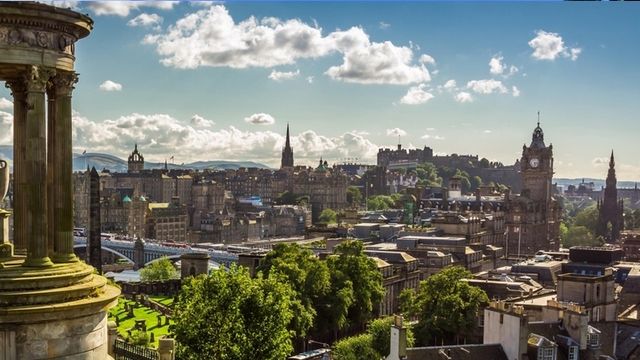